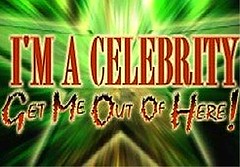 Im a Celebrity is back,  and they are the normal bunch of has beens and wannabees!,   It is certain though we will all be hooked.
William Hill are offering 10/1 that I’m A Celebrity is cancelled for weather reasons as Joe Swash is now the 7/4 favourite to win. Robert Kilroy Silk is 1/1 to be chosen for the Bush-tucker trial for a third night running!

Get a Free Bet on I’m a celebrity get me out of here with any of these bookmakers Skybet, Betfair Bluesq and William Hill

William Hill have halved the price of a celebrity walking out of the jungle from 6/1 to 3/1 following disenchantment in the camp. “Esther has already had a wobble and the severity of the first few bush tucker trials has made people think that at least one of the ‘celebrities’ will throw their toys out of the pram and walk in the next few days,” said Hill’s spokesman Rupert Adams.
Robert Kilroy Silk has blotted his copy book and he is by far the best backed contestant to be the first to get the boot from I’m A Celebrity at 11/4 to go with Brian Paddick almost as unpopular at 3/1. Hills also have a new favourite Jo who is in from 3/1 to 7/4 and looking good for a few quid.
“Joe & Nicola the only two they are backing but I think that Kilroy is going to have a shocker,” said Hill’s spokesman Rupert Adams.
Bookies William Hill have slashed the price of both Martina Navratilova and George Takei who both came out of the first session with flying colours. “They are the two that the public have immediately taken to and I, for one, would not be surprised if either went on to win,” said Hill’s spokesman Rupert Adams.

Conversely Robert Kilroy Silk is the pariah of the pack and has failed to attract a single bet of more than a pound. “Since the opening night the biggest bet we’ve taken on Kilroy is just 50p, which seems to be a fair reflection of his chances,” said Hill’s Rupert Adams.

Get a Free Bet on I’m a celeb with any of these bookmakers Skybet, Betfair Bluesq and Williams Hill

Get our tips for Free Donate here

Any cookies that may not be particularly necessary for the website to function and is used specifically to collect user personal data via analytics, ads, other embedded contents are termed as non-necessary cookies. It is mandatory to procure user consent prior to running these cookies on your website.